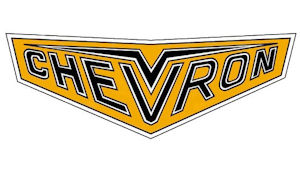 Chevron racing cars were designed and built by Derek Bennett from 1965 until his death in a hang gliding accident in 1978. The company continued for 2 years but lacking the hands-on engineering approach of Bennett the company went into liquidation in April 1980.

All the assets, including all copyright in drawings, components and car body moulds, were bought by a consortium of Scottish racing drivers/enthusiasts, led by Robin Smith and Lawrence Jacobsen, who continued the business as Chevron Racing Cars Scotland Ltd. This company produced spare parts for the range of Chevron cars as well as designing and building new Sports 2000 and Formula Atlantic models.

Chevron Racing Cars Scotland Ltd was liquidated in 1983 and all assets of this company including copyright in drawings and materials required to manufacture all prior Chevron racing cars were purchased by Roger Andreason and Tim Colman for Chevron Cars Ltd.

From 1983 until 2006, Under the control of Roger Andreason and Tim Colman, Chevron Cars Limited produced over 100 new cars for Formula Ford, Formula Ford 2000, Sports 2000 and Group C categories – as well as restoring a large number of the earlier cars and providing a comprehensive spare parts service for owners of a wide range of Chevron models – supplying these parts worldwide.

In 2006 Chris Smith purchased a majority shareholding in Chevron Cars Limited from the owners Roger Andreason and Tim Colman although Tim remained a Director – a position he had held since 1983. Roger and Tim still remained (minority) shareholders in the company.

In July 2011 Roger Andreason and Tim Colman bought back Chris Smiths’ shareholding and Roger was re-appointed as Managing Director of Chevron Cars Limited. The management team are fully committed to the Chevron name and history, and are still constructing continuation models as well as expanding their provision of spare parts. They continued to use the Chevron logo and still owned the IP.

Chevron Heritage Limited advises customers and Chevron enthusiasts that we have no connection with any companies operated by Vin and Helen Malkie  - which have no connection with the original Derek Bennett Company. Mr and Mrs Malkie do not own the original jigs, patterns, body moulds or drawings and have not been licensed by Chevron Cars Limited or Chevron Heritage Limited to manufacture genuine Chevron continuation cars or spare parts.